Rumors abound about the strange creature known as "Chippy". We, THE FRIENDS OF CHIPPY SOCIETY, have started this internet journal of Chippy-sightings and events in order to try to understand this mysterious, delightful, and increasingly dangerous denizen of Earth.

Chippy-Watchers everywhere are abuzz about this latest picture of what we think is Chippy.

This was the last picture on a roll of undeveloped photographs found in Tit Valley St. Park, KB. The film belonged to a Mr. James Nasium of Eternal Turd Falls, Va. who disappeared while on a camping trip to New York City. The other pictures featured perfectly normal shots of the Gay Man-Boy Annual Fist Fest Mr. Nasium had been attending. Then this last shot on the roll proves that Mr. Nasium was visited by...SOMETHING.

There are rumors that Chippy was spotted at a bowling alley in Richmond, Va. If anyone has pictures, please send them Pictures of Chippy.

WHAT IS CHIPPY? According to City Park Ranger Skeksis Mandalabra, Chippy is a that most rare of creatures, the last surviving North American Chippapotamus in existence. But Chippy is much more. After the tragic death of his family in an unfortunate porta-potty accident, Chippy dedicated his life to homeless animal rights awareness. But Chippy was hampered by the fact that a mature Chippapotamus cannot speak english--however he can form rudimentry words while singing kareokee. So with his handler, Ranger Mandelabra, Chippy travels the countryside hoping to raise the awareness of the plight of some of our countries more unfortunate residents.

WHAT IS HOMELESS ANIMAL RIGHTS AWARENESS? Few people realize that many animals are forced to sleep outdoors without nice pillows and down comforters. Animals must fashion shelter from branches and other nasty things they find outside. Chippy had to live for years in the cooling pipes of a condemned nuclear facility. Chippy can see a world where shows like "Trading Places" feature families of bears that come to live in your house. Chippy is pitching various networks with this concept.

CATCH "THE CHIPSTER" at-- 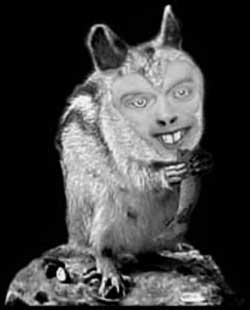 Here's some shot's from one of Chippy's first appearences in North America, at the MF Gallery in NYC. 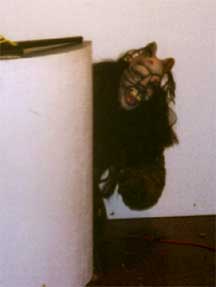 Prompted by promises of food, Chippy appears from behind a desk... 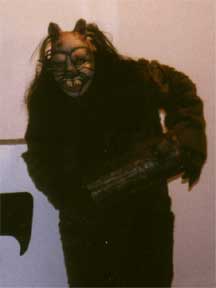 Chippy with his only possession, a chew-log... 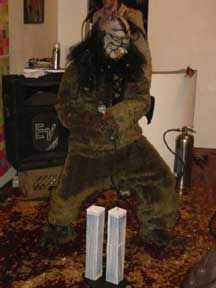 Chippy performs his stunning indictment of American excess, "Creature of the Night" 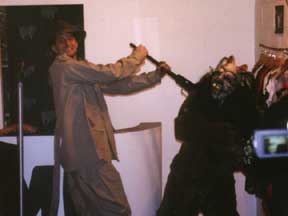 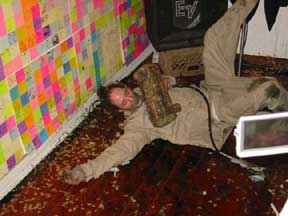